JFK’s TWA Flight Center has been reimagined as a hotel

May 16, 2019 – The TWA Flight Center at JFK Airport, originally designed by Finnish architect Eero Saarinen in 1962, has recently completed its conversion into a 512-room hotel. The hotel features restaurants, bars, and retail outlets housed inside the 200,000 sf former flight center. The hotel rooms are included in two hotel wings that sit behind the historic building and offer views of JFK’s runways.

Also included in the renovated Flight Center is 50,000 sf of meeting and event space that can host up to 1,600 people, a rooftop infinity pool, a Lockheed Constellation L-1649A that has been transformed into a cocktail lounge, and a 10,000-sf fitness center, which the developers claim is the largest hotel gym in the world. Museum exhibitions on TWA, the Jet Age, and the midcentury modern design movement are available for guests to explore.

Because of its proximity to a busy airport, the design team needed to pay special attention to sound. Cerami Associates led the acoustic modeling and simulation process for the hotel. The firm began by establishing acoustic performance criteria by recording and measuring noise levels (from things such as traffic and jets taxiing and taking off) at various locations, including the rooftop. Cerami then compiled the data and made the acoustic projections for the guest rooms tangible through simulation. This allowed the TWA project team to experience a modeled guest room sound experience and choose the best option for achieving the quiet they were looking for. The result is a hotel that the team says is one of the world’s quietest.

The hotel is the only on-airport, AirTrain-accessible hotel at JFK and is connected to JFK’s Terminal 5 via Saarinen’s flight tubes (as seen in the 2002 movie Catch Me If You Can). 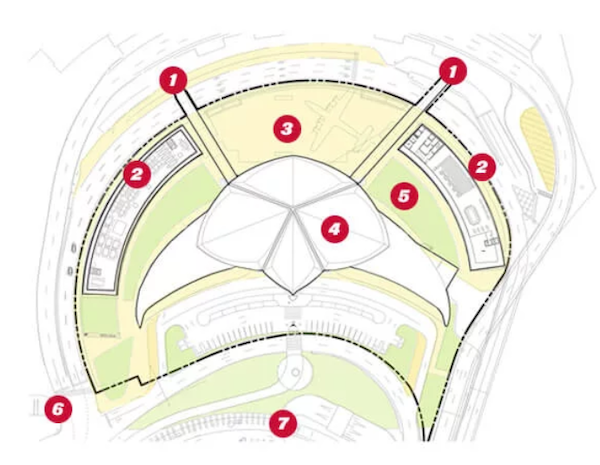 We’re the largest woman-owned acoustic design and technology consulting firm in the U.S.